They brave an arduous journey across a treacherous desert with only a few possessions and the blind faith in the prospects for a better life. In their ignorance they give their meager earnings to a man, called "El Coyote", who promises to take them safely across the desert and into a community with a job and stability. In reality they become hostages to a treacherous underworld that is exacerbated by a criminal element and allowed to operate by an inept domestic legal system.

These people will live in a drop house and share a room with 5 or 6 other anonymous Mexicans who are also searching for the same stability. They are virtual hostages to the Coyotes who control the trade of human smuggling. Their families are threatened back home if they act out of line. Their conditions are deplorable. Their rights are minimal. The houses in which they live are a blight upon communities throughout the U.S. And they are more then willing to put up with all of this so that they can make $10 a day trimming the bushes in your backyard.

Who are these people?
What are their motivations?
Why do they risk so much to get so little in return?

The following numbers taken from the Pew Hispanic Center are a staggering reminder that we are literally sitting on top of a powder keg. If we are unable to answer and address those questions above we will have little luck in dealing with an issue that is becoming larger by the minute. 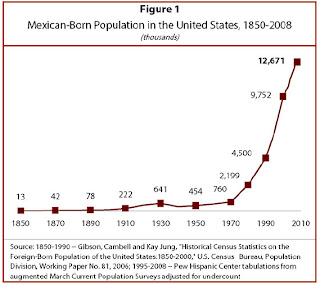 Those numbers highlight a monumental seismic shift that is taking place in regards to the demographics of the United States. It doesn't take a high priced study to tell us this when all we need to do is drive over to the nearest home center. The Hispanic, particularly, Mexican neighborhoods are becoming an increasingly bigger part of the community. Depending on your perspective this number represents the demise of the American way of life or the fruition of the grand American dream.

That is a debate for another entry. Right now I want to focus on the Mexicans who are willing to sacrifice everything to come here and take a job that most Americans find demeaning. We are taught that to fully understand an issue we must understand the perspective of the other side. Here is the point of view from that other side.

The numbers for Mexico are more difficult to nail down. Any quoted numbers will come from the Instituto Nacional de Estadistica y Geografia (INEGI) of Mexico. This is the Mexican equivalent of our US Census Bureau. Their numbers are widely considered unreliable. I will primarily use anecdotal information and observations to color my depiction. I will use numbers, where possible, to back up observations and assertions.

Now lets move on to those questions regarding who they are and what motivates them.

To the typical US citizen "these people" are just another group of Mexicans. It is a lot easier to lump them together into one uniform group. But beneath the surface Mexico, like any other large nation, has a complex cultural and demographic milieu that should be understood. Mexico is a nation of over 106 million people, why are over 11% of their population fleeing their nation. Are they fleeing? Let's look at a few things.

Mexico is a nation of huge economic disparity. The wealthiest 10% of the nation controls around 50% of the wealth. Did you know that the richest man in the world, Carlos Slim, is Mexican? This is the land of the "Mordida" where corruption is not only rampant but an openly accepted cost of doing business. Those who are politically connected make all of the money. Those who aren't suffer and their only solace is the occasional bone thrown at them by the party in power, most notably PRI, to placate them and prevent another revolution. Credit doesn't really exist. A middle class doesn't really exist. As a Mexican you are either born into wealth, exercise corruption for a living, or you accept your lowly station in life. While there are a notable exceptions to this rule there is little infrastructure in place for the typical industrious Mexican to get a head.

Mexico is also a nation of huge racial disparity. Race and wealth go hand in hand in Mexico. The lighter your skin the better off you are. The indigenous or indian populations are among the poorest in the world. The largest concentrations of these populations are in Southern Mexico in states such as Oaxaca, Guerrero, and Chiapas. As expected these are the poorest states in Mexico. Despite superficial attempts made by the government towards greater equality these groups still languish in poverty. They are poorly educated because most children, out of necessity, are forced to work in substandard conditions in order to help sustain the essential needs of their families.

Mexico is also a nation of strong families and strong national pride. Their Catholic roots and lower economic conditions help explain the larger families. Their pride in a strange way stems from their long history with Spain and other invaders. They have long been a nation that has been exploited. Research the word "chingar" and you will have great insights into the Mexican psyche. The fact that they nationalized their oil away from US foreign corporations in the 1940's and that PEMEX is still state run in spite of economic common sense is directly attributed to their national pride and their defiance towards those foreign interests who once meddled in and sought to control their affairs.

These three characteristics go a long ways in helping us understand the circumstances behind their decision to live in these conditions on foreign soil. So a few observations that will generally be right regarding most Mexican immigrants.
What does the rest of Mexico think about this trend? I would venture a guess and say that they are somewhat relieved by massive emigration. Fewer mouths to feed, fewer jobs to fill, and fewer votes to buy. Since the vast majority of Mexican immigrants are poorer and uneducated there is no real concern for "brain drain". They typically aren't losing their engineers and doctors to America. They are losing a workforce for whom there is no work. Also if immigration is greatly reduced they potentially lose their 3rd largest source of income in the form of foreign remittances sent from the US to families in Mexico.

While this is a general brush stroke that barely scratches the surface of a more complex situation it does help provide a better picture to the immigration situation. Given the circumstances in Mexico I do not fault the actions of many to find work in the US. I am confident that many of us, if given a similar lot, would take a similar course. I hope to delve more into the Mexican perspective in a couple of more subsequent posts. There is still more to cover from this angle including the elusive question- Mexico has always been at an economic disadvantage to the U.S. so why have we seen such a drastic increase in Mexican immigration over the past few decades?
at April 30, 2009

Good background. The race element is interesting and it was the same way in Haiti. The darker skinned you are the lower your social status and opportunities. 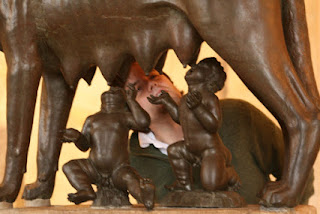